On 21 May 2018, the International Institute of Tropical Agriculture (IITA) confirmed the outbreak of newly discovered species of Armyworm, Southern Armyworm, in the southern region of Nigeria. This pest was first noticed in December 2016 on 450 acres cassava farm in south-eastern Nigeria and also in southern Benin in 2017. It is the Southern Armyworm (SAW). 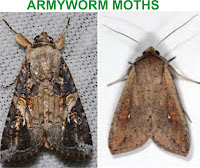 Armyworm has been a major threat to global crop production and food security. We are familiar with the Fall Armyworm; it is well known for its devastating activity in maize farm and other cereal crops production.

Armyworm is more deleterious at the larval stage.  Efforts are currently ongoing to mitigate the deleterious effects of this pest. The emergence of the Southern Armyworm is the prevailing threat to food production and food security in the southern regions of the world.

The Southern Armyworm, Spodoptera eridania, is a native of America and more endemic within southern America and Argentina. Owing to its fast migrating ability, this species of armyworm has found its way down to Africa. It was first discovered in 2016 in Edo state, Nigeria.

A farm of 450 acres of cassava near Ubiaja in south-eastern Nigeria was hugely infested by some unknown caterpillars in mid-December 2016. Some of these caterpillars were hunted and preserved. This was later sent to Biodiversity center at IITA station in Benin for diagnosis and identification.

In 2017, the same caterpillar was found in another cassava farm in areas surrounding Dasso, southern Benin. The adult moth was finally found and collected from a tomato farm in Yaoundé, Cameroun. A sample of the moth was compared to the identified sample from the University of Masuku in Franksville, Gabon.

Various parts were compared and examined; such as outer features of the moths and genitalia of both sexes. To truly affirm the identification of this pest and reach a tenable conclusion, samples of the moth and caterpillar was collected from their prevailing location and sent to the Germplasm health, virology and diagnostics unit at the headquarter of IITA in Ibadan for DNA barcode analysis.

The result from this analysis truly confirms the identification of the pest as the Southern Armyworm and not the African cotton leafworm as earlier presumed.

IDENTIFICATION AND LIFECYCLE OF SOUTHERN ARMYWORM

Identifying southern armyworm is quite difficult and vague. The moth is not really hard to detect, unlike the caterpillar. The moth is 33.38mm in length, with cream or gray ground color. It has a dark brown streak at the inner margin of the forewing.

The southern armyworm is characterized by high fecundity.  It can produce about 1500-3000eggs within a lifecycle of 30-40 days. This accounts for its sporadic invasion and gross destructive activity. Of all the species of the Spodoptera, the southern armyworm is the most polyphagus; meaning it can feed on any crop it infests. It has been found on maize, vegetable, tomato and cassava farm.

The introduction of this pest to the African continent is a menace to the food production and food security. It has been observed that this pest does not only affect cereal but has been found on other staple crops such as tomato and cassava.

One of the most prominent ways of controlling southern armyworm is through conventional land preparation. This method makes the environment unfavorable for this pest and distorts all breeding activities.

Also, the use of organic pesticide is highly recommended as it has laudable results in pest control. Several kinds of research are ongoing to ensure the end of these deleterious pests as they are threats to global food production. More updates shall be uploaded as more results unravel.