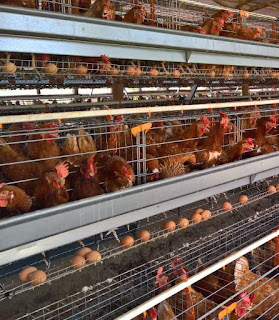 Livestock farming is a pivotal aspect of agriculture. The need for animal and their byproducts like: milk, egg, meat, etc.; is very alarming. Maintaining animal performance needs to be duly addressed to increase livestock productivity, thus, making more money from the venture.
It is crucial to know the basic meaning of livestock farming and the types of livestock available; this will aid the knowledge of the factors hindering their production. Livestock farming is the rearing of farm animals for human consumption and industrial use, in cases of animal byproducts. Animals like: cattle, sheep, rabbit, poultry and swine are called livestock.
The potentiality and capacity of an animal to produce differs between: species, breed, production phase, age, nutrition, health status and environment. For an animal to reach its production potential, several precautions have to be taken. There are some mistakes livestock farmers are not supposed to make, such mistakes are:
• The animal specie and breed: As a prudent farmer, you should inquire about the history of the animal you want to purchase; irrespective of the animal appearance, the history speaks better about the animal. Always ask for animal’s history to be confident of their production potential.
• Nutrition: As a profit-oriented farmer, you should know your input determines your output. The more you feed your animals, in the right quality and proportion, the more they produce well.
• Environment: This is a very important factor in livestock production; this is a factor any farmer should put into consideration before investing. This should not be underscored much as every farmer must provide a conducive environment for his flock.
All the above are known factors that should be tackled before the commencement of the farm operations. However, there are some factors that are obscure to the farmer; such factors surface after the commencement of farm operations. They should be tackled as fierce as possible to mitigate their effects because they are capable of turning down a presumed profitable farm. These factors are:
1. Anti-nutritional factors in animal feed:
Anti-nutritional factors are components or substances present in the feedstuff, which reduce or distort the digestibility of the feedstuff or the utilization of the feed by the animal. These substances are called antinutrients. Antinutrients are constituents of feedstuffs that reduce the digestibility of any feed in the animal system; they are present in virtually all feedstuffs but of varying concentration.
Soybean is the most valuable protein supplement in animal diet; it is widely used in poultry feed production because of its high level of amino acid concentration. However, raw soybean contains lots of anti-nutritional factors. They include: saponin, tannin, phytoestrogen; all these are in low concentration, thus, have no effect on the feed digestibility. However, there are two main anti-nutritional factors in soybeans; they are Trypsin Inhibitors and Lectins.
These two are capable of causing huge damage to the digestive tract of monogastric animals, like poultry and young ruminants. They result in stunted growth, reduced feed efficiency and pancreatic hypertrophy, that is, increase in the size of the pancreas and duodenum, when feed to a monogastric animal. When fed to ruminants, they reduce the amount of protein that bypasses the rumen.
However, these antinutrients can be removed through heat processing and the processed soybeans are fit to be used for feed formulation without any limitations. These processes involve the application of heat to the seeds, when heat is applied adequately; it denatures these antinutrients, thus, making the feedstuff fit for animal consumption.

Sorghum is a good energy source for livestock but dark color variety of sorghum contains Tannin. It reduces protein digestibility.
These anti-nutritional factors can be removed through these processes are:
• Roasting.
• Extrusion process.
• Expeller process.
• Micronization
These processes subject the raw soybean to intense heat and pressure, through extrusion and expeller process. The heat must not be more than 135 ℃  and 150 ℃  for 30 minutes to avoid roasting.
2. Heat stress
Heat stress is the second major factor affecting livestock performance. This factor can turn a profitable livestock farm to an insolvent one, especially poultry farm. Animals are heat stressed when they find it difficult to balance their body heat production and body heat loss. This can occur at any age of the animal and any type of animal.
Heat is a very detrimental factor in livestock production, especially during high humidity; when animals are heat stressed, they become restless and their productivity is impaired greatly. At times, it causes loss of animal especially in poultry. Poultry are more susceptible to heat stress and this can be observed when they pant.
Panting is a normal response to heat and not initially considered as a problem. However, as temperature increases; the rate of panting increases. If the heat generated within the animal becomes greater than the maximum heat released for a long period, the birds may die. The normal body temperature of a bird should be between 35 ℃ – 41 ℃, an increase in this can lead to the bird’s death.
You may wonder or be curious about how birds produce or generate heat, heat is produced during metabolic activities in birds; they include: maintenance, growth and egg production. However, heat is lost through three (3) major ways:
• Radiation: This is when the surrounding surface temperature is below the birds’ body temperature.
• Conduction: Heat lost when birds are seated on litter that is cooler than their body temperature.
• Convention: Heat lost as a result of the natural rise of warm air from around a hot body. When the air moves faster enough, to break down the boundary layer of still air that surrounds the body.
How birds respond to heat stress
• Reduction in feed intake.
• Increase in water consumption.
• Segregation from other birds.
• Moving against cooler surface.
• Panting.

How to reduce heat stress

• Supply a lot of water: Water is lost from the lungs when birds pant; so more water is needed to prevent dehydration. However, cool water stimulates water intake.
• The diet has to be adjusted because when a bird is heat stressed, there is low consumption of feed. Also, the protein and energy ratio has to be revisited. Protein contributes more metabolic heat than fat and carbohydrate.
• Depopulate the flock as soon as hot weather approaches.
• Provide adequate ventilation for the animals.
• Provide fast air speed over the birds.
• The orientation of the poultry house should be such that the longest side faces the direction of the wind.
click here to read more about Heat stress
These two factors are great threats to livestock production, they are often unforeseen but when they occur or their impacts are being noticed, drastic precautions have to be taken to recuperate the farm’s productivity.