Cattle production is one of the lucrative farm enterprises in vogue. Aside from nutrition, the health of the flock is also very essential to the profitability of the enterprise.  Blackleg disease in cattle is one of the diseases that affect cattle, especially calves. It is very important farmers identify this disease before it escalates causing economic loss.

Cattle rearing is a huge investment that requires proper monitoring especially the health aspect; irrespective of the age of the cattle, it is highly vulnerable to some diseases. One of the highly fatal diseases of cattle is the blackleg disease.

About blackleg disease in cattle 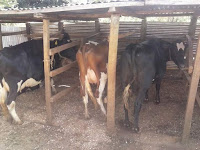 Blackleg disease in cattle is one of the clostridial diseases caused by bacteria Clostridium chauvoei. This clostridial infection is spore-forming in nature; this feature allows rapid spread across the cattle tissue within a very short period.

It is very important to know that most of these disease-causing organisms: fungi, bacteria, virus, and protozoan; do not naturally occur unless certain conditions are available. Such conditions allow the growth and development of the pathogen leading to an endemic environment. Clostridium chauvoei causes bacterial diseases of sheep and cattle.

What causes blackleg in cattle

It is very important we know what causes blackleg in cattle so as to know how best to manage and keep the flock safe from the causative organisms. Usually, young cattle, between 6 months and 2 years of age are most susceptible to the blackleg disease.

The bacteria causing blackleg disease are spore-forming; the spores of the bacteria are very hardy and can live in the soil for a very long time.

Calves, usually inexperienced in grazing, get infected during grazing. The calf ingests the spore through grazing on the infected rangeland and the spore pass through the wall of the gastrointestinal tract, and after gaining access to the bloodstream, are deposited in the muscle and other tissues such as spleen, liver, and alimentary tract; where they may remain dormant indefinitely.

Unlike other cattle diseases, the blackleg disease cannot be transmitted by mere contact of infected cattle and healthy cattle. The outbreak of blackleg disease is more rampant after flooding or excavation of any area in or within the farm area.

The symptoms of blackleg in cattle are:

At first, the swelling is usually painful, small and hot; the temperature of the area is relatively higher than that of the body.  As the bacteria establish themselves in the cattle system, the swelling enlarges and becomes spongy, palpable and gaseous; such that if you palpate the swollen area, gas can be felt under the skin.

The infected cattle usually die within 12 to 48 hours.  In severe cases, it leads to cows dying suddenly without any observed clinical signs or symptoms. Hence, treatment of blackleg disease is usually fruitless due to the acuteness of the disease and its fast rate of the bacteria proliferation. Post-mortem examination reveals a dark red, dry-looking muscle containing small bubbles of gas.

Treatment of blackleg in cattle

The treatment of blackleg disease in cattle is not always achievable; this is due to the high rate of proliferation of the bacteria. The bacteria are more virulent and can easily break down the entire system of the animal within a very short period of infection; hence, making all efforts to treat the disease fruitless. Preventive measures are usually adopted and over time, it has been very effective at controlling the disease. Vaccination is the most effective way of treating blackleg disease.

Vaccination is done with the following blackleg in cattle vaccine: Ultravac 5in1 and Ultravac 7in1.

The dosage of blackleg vaccines goes as follows:

Ultravac 5in1 should be administered at 2mL for cattle and Ultravac 7in1 2.5mL for cattle. For unvaccinated cattle, Calves between 3–6 months of age should be vaccinated with calf vaccines twice within 4–6 weeks. This should be complemented by a booster dose 12 months later.

It is advisable to administer another blackleg vaccine to a cow at about a month prior to calving; this is to facilitate the transfer of passive immunity from the cow to the calf after birth. This will shield the calf until the period of vaccination.

Note: Carcasses of infected cattle should be disposed by burning or buried deeply in a fenced-off area to limit heavy spore contamination of the soil. Also, the infected pasture should be abandoned or subjected to treatment through soil sterilization.

With proper medication and feeding, the blackleg disease in cattle can be prevented. Proper pasture management is needed before and after the establishment of the pasture. This is where the relevance of soil treatment comes to play when planning to cultivate any land.