WHY FARM ANIMALS REJECT SOME GRASSES 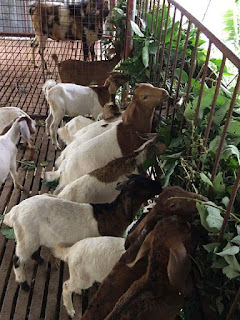 Farm animals, particularly the ruminant animals, are known to feed better on grasses by the virtue of the complex nature of their digestive system.
Grasses are the natural feed for ruminant animals like: cattle, goats and sheep; especially as they grow older. Feeding young animals with grasses is peril to their well-being as young animals have immature rumen.

What makes grasses palatable to ruminant animals is the possession of rumen in their digestive tract; this is where digestion of grasses takes place.

Truly, grasses are the best feed for ruminant animals; but not all grasses. There is a particular material in grasses that makes them unpalatable to ruminant animals. If you notice your farm animals reject a particular grass, it is not the grass actually but the physiological state of the grass. The material that repels farm animals from all grasses is called Lignin. Lignin is an amorphous material which is closely associated with fibrous carbohydrate of cell wall of the plant tissues.
All grasses contain lignin but the concentration varies; the lignin content of a grass gradually increases with the maturity of the grass. Also, the higher the lignin content of a grass the lower the palatability and digestibility of the grass, thus, making it unfit for farm animal consumption. If you notice an animal grazing or browsing on the field, you would notice the animal eats only the fresh part of the grass and not the whole grass.
Have you ever reasoned why the animal did so?
It is because the animal knows the lignin content of fresh and young grasses is very negligible. Fresh grasses have lower lignin content and they are the best to serve the animal. Older grasses contain high lignin content; this makes them unpalatable for farm animals’ consumption. They are not easily digested by the animal.

Grasses with high lignin content can be identified by its toughness and almost woody stem. Grasses with low lignin content are always succulent and very fragile; this is the best type of grass to feed farm animals because they are readily digested and utilized by the animal.
In a system where grasses are grown and harvested for animals to feed on, only young grasses should be harvested to enhance easy digestibility. Also, they are more nutritious. However, in a system where animals are allowed to graze freely, the animals would naturally select the young grasses and leave the older ones.

The problem of this system of grazing is that, harmful insect could be consumed alongside the grasses, thus, causing damage to the animal system or death in a severe cases.

WOULD YOU LOVE TO RECEIVE REGULAR POSTS FROM THIS BLOG?
THEN SUBSCRIBE BY ADDING YOUR EMAIL ADDRESS IN THE SUBSCRIPTION PANE BELOW