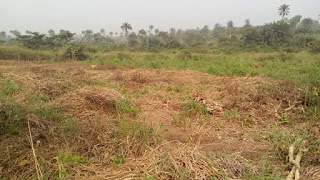 The planting season is here for the traditional farmers; these farmers rely solely on rain water to cultivate their crops, thus, have limited production. However, the commercial farm, where planting is done all through the year, uses irrigation facilities to enhance their crop yield throughout the year. This is the most profitable form of crop production.
It is an established fact that pests are great threats to any crop producing enterprise;
they are pathogens, they include: insects, rodents, humans. Pest causes diseases,
reduces yield, and reduces the quality of the produce; in severe cases leads to total
crop failure, leaving the farmer in a chaotic condition.

How to control pests

Pest control starts prior to planting; it requires drastic approach to reduce their effects below economic damage level. Pesticides are chemicals commonly used to control pests; however, it increases the cost of production. Further research has been carried out on how to control pests of different crops without altering the nature or contaminating the produce at the long run. This initiated the use of cultural practice to control pests. There is a cultural practice that reduces pest invasion without the use of chemicals; it has been proven effective and widely used in commercial farms to control pests and also increases yield and profitability of the business. It is called conventional land preparation technique.
Land preparation is very important in crop production; it prepares the land and gets it ready to work, it revitalizes the soil to enhance reasonable crop yield. There are several methods of land preparation but the most effective is the conventional land preparation technique. The conventional land preparation technique involves:
Surface clearing is the first work done on the field; it entails clearing, stumping and total removal of debris from the soil. This is where most farmers stop their land preparation operation. This is just “Zero Tillage” land preparation technique. Planting on such land agitates pests in less than a week.
The next operation is ploughing; ploughing is the pulverizing of the soil, that is, turning up the soil from a deep depth. This has great impact on the soil and crop to be planted. Pulverizing the soil means uprooting the soil, turning the soil over and exposing the hidden portion of the soil. The effects of this is that the habitats or abodes of pests are exposed; this makes the pests evacuate from the land in search for new abode. Also, younger pests and pest eggs are exposed to unfavorable conditions, thus, eliminating them totally. However, some farmers stop at this stage; this is not good enough. This stage is called the minimum tillage land preparation technique.
Firstly, the ploughed land should be left untouched for about 2 weeks before planting is done on it; this facilitates:

This is the final stage of the conventional land preparation technique; it is done 2 weeks after ploughing. After ploughing, the soil forms clogs, that is, they are divided into big particles and dispersed on the field. Also, the soil becomes hard or caked. What harrowing does is to break the clogs, make the soil even, fine, soft and friable. After harrowing, the soil looks smooth and neat; such soil is well drained and fit to plant any crop. It aids quick germination and quick root development.
At the end of this operation, there are fewer emergences of pest and diseases. Also, weeds are controlled till the plant outgrows weed threats. Though, this technique is expensive but anything worth doing at all is worth doing fine and well.