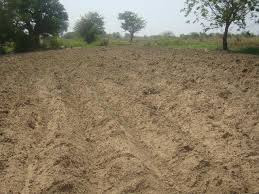 Land preparation is a very important practice to enhance good yield from crop grown. It is one of the measures used to control crop diseases and pest invasion. Land preparation is also known as tillage practice, tillage practice is the mechanical pulverization or manipulation of the soil to bring about favorable conditions for the growth of crops. Tillage practice includes all operations used for the purpose of modifying the soil characteristics. It cost about 30% of the total cost of cultivation.
There are three main techniques to carry out tillage practice, they are:
1. Conventional tillage practice:
This is the use of mechanical farm implements for the land preparation of the farm. It involves ploughing otherwise called primary tillage and harrowing also called secondary tillage.
In ploughing, the soil is lacerated, lifted, shattered, twisted and disintegrated. The weeds and stubble are incorporated into the soil to add fertility to the soil. The depth of the tillage varies from 10-30 cm. The implements used are mould board plough, disc plough, sub soil plough and chisel plough, they are usually powered by tractor or draft animals like cattle, donkey etc.
After the primary tillage comes the secondary tillage, this practise makes the soil finer and makes if fit for planting. In this practise, large lumps of soil produced during ploughing are broken into finer particles to make an even soil surface for planting seeds and seed beds preparation. It involves harrowing, pulverizing, raking and leveling large lumps of soil. The implements used are cultivator, harrows, clod crushers and leveling implements. They are powered by the use of tractor or draft animals. It makes the soil well aerated and provides a good rooting medium for the plant. Also the soil are well drained, it also gives a weed free seedbed, incorporates fertilizer and improves soil conditions.
However, the soil is prone to erosion as ploughing removes the vegetation cover and exposes the soil to rainfall, wind and overland flow. The trampling of the implements or draft animals on the soil induces soil compaction which affects, negatively, soil aeration, water infiltration and microbial proliferation.
2. Minimum tillage practice:
As the name implies, minimum tillage is the little manipulation of the soil. It is otherwise referred to as traditional tillage method. It is not as sophisticated and technical as the conventional tillage. It involves the use of cutlass to slash weeds and vegetation regrowth on the farm, the little manipulation is done with the how and rake . The soil is disturbed to a minimum extent and the soil structure is not fully disintegrated, the stubble are used as mulching material to converse soil moisture. It is cost effective and saves time, also the decomposition of the weed and debris add nutrients to the soil.
However, labor shortage can make it expensive and tedious.
3. Zero tillage practice:
Zero tillage otherwise called no tillage is a simplified form of minimum tillage. It involves only opening of narrow strip of 2-3cm wide or hole in the ground for seed or seedling placement. There is no pre planting seedbed preparation. Weeds are taken care of with the use of herbicides and cutlass without disturbing the land. The crop is then planted directly without tilling or ploughing the soil, this method is highly effective under sloppy lands where soil and water erosion are heavy.
In this method, the soil structure is not disturbed  and all soil microorganisms remain intact, also the soil is not prone to erosion and the cost of production is reduced. However, the use of chemical in this tillage technique makes the cost of production high because of the expensive prices of chemical and sometimes unavailable.
Good tillage practice is one of the prerequisites to having good yield.