How To Make Hay For Feeding Farm Animals

Feed preservation, through hay making or silage, is very important in livestock production, especially, ruminant animals, owing to the fact that their feed availability is seasonal. During the rainy season, there is a boom of fresh succulent grasses for feeding farm animals. However, during the off-season, farmers are often challenged due to the unavailability of feeds to cater for the feeding of their farm animals.

Some farmers often migrate from one location to another where fresh grasses can be gotten to feed their animals. Larger percentage of the world’s livestock farmers, cattle, goat and sheep farmers, operate on a semi-intensive system of rearing farm animals.

During the period of vegetation boom, they allow their farm animals to graze around and preserve excess feed; when dry season sets in, the preserved feed, in form of hay, is used to feed the farm animals till the next vegetation boom season. This makes a feed available all year round for cattle, goat, and sheep.

Hay is the feed produced by drying green forage to a moisture content of 15% or less. It is the commonly used feed stored for feeding cattle, sheep, and goat during the off-season and at times throughout the year.

Hay is nutritionally rich and more palatable for farm animal, especially the ruminant animals as they are the ones that greatly utilize this feed properly.

What is Hay made of?

Hay is basically made of harvested grasses and legumes but modified structurally and physically to be more palatable and nutritious for the farm animals.

Grasses used to make hay include:

Legumes that can be used as hay include:

These are examples of plants used to make hay; the mixture of both grasses and legumes enhances the palatability of the hay and also increase the nutrient content of the hay. This is a sustainable way of feeding cattle and other ruminant animals.

The grasses are harvested at their early stage of maturity, at a tender age, to maximize nutrient content. Harvesting starts after the dew has evaporated from the green material in the late morning. The grasses are then dried quickly and not unduly exposed to the sun to avoid leaf losses and leaching of nutrient as a result of rain. The grasses in tropical areas take 50-55 hours to dry up in good weather condition and 70-75 hours in poor weather condition.

Cut and place the grasses or legumes or the combination of both into small heaps about 20-30cm high and turn the heap frequently in the sun to encourage quick drying. Raking or turning should be completed before the hay get completely dried to avoid excessive shattering of leaves and over exposure to the sun.

Raking should be done when the dew is on and if the weather is humid or rainy, place the cut material (hay) off the ground using a home-made tripod stand to facilitate drying. The optimum permissible moisture content for strong hay is around 18-22%.

When the initial moisture has evaporated, the material can be placed under the roof or any shade to dry completely away from the sun. The hay should be collected as soon as it is sufficiently dried and stored as stacks and should be fairly compressed and loaf-shaped or conical-shaped. 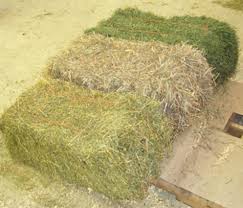 Alternatively, to make baled hay, bailing box can be used to make a tightly packed bale, tied with string. This will reduce wastage from shattering and make storage easier. The dried-baled hay should be stored and fed to animals.

Storage is very important as it determines the shelf life of the hay. Store in a dry place; preferably, do not put the hay on the bare ground, placing them on wooden pallets keeps them safe from moisture. Hay can stay for a long period without any change in the nutrient composition or quality, provided they are stored under good storage condition.

How long does it take to make hay?

This is very important. From the processes described above, you would notice that it takes a few days to make hay. It takes about 10 days to make good hay and can be stored for more than 6 months.

Standards or grades of hay are generally based on the percentage of leaf in legumes, percentage of green color, percentage of foreign material, maturity or ripeness when cut, size and palatability of the stems and general condition. With all the aforementioned criteria, hay is classified as: