Agbabiaka AbdulQuadri September 25, 2016 1 Comments Crop
Plant propagation is the production or method of establishment of plants as an independent unit. It refers to the way by which plants produce young ones. There are numerous techniques used in plants multiplication but they are divided into two maim categories namely:
• Sexual propagation.
• Asexual propagation.
Sexual propagation
Sexual propagation is the development of a plant through the sowing of seed, which is produced through the pollination and fertilization between male and female gametes to produce an independent unit. It is the commonest means of propagating self and cross pollinated crops. The seeds can be sown in either nursery or directly into the field on ridges, beds by broadcasting, drilling or dibbling. Crops planted through this means are: Tomato, okra, watermelon, pumpkin leaves (ugwu), maize, cowpea, groundnut, millet, tobacco, cocoa, and oil palm. 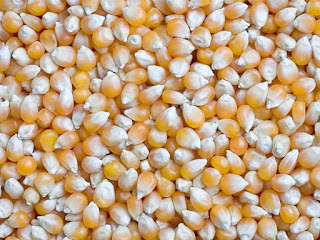 Advantages of using sexual propagation are:
• The seeds are usually inexpensive.
• Seeds can be stored for a long time.
• Seeds do not carry over diseases and pests which attack the parent plant, thus sexual propagation is a method of starting a disease-free plant.
• Increase in plant population can easily be achieved by the use of seeds.
• It brings back vigour into the new plant.
• Seeds are easily transported from one place to another because of their small nature.
• Increase in plant population can be achieved by using seeds.
• It brings about new variety of plant.
Disadvantages of sexual propagation are:
• Some seeds do not produce plants that resemble their parent plant.
• Seeds used for propagation are also valuable food for man.
• Seeds do not produce true to type plants.
• Seed borne diseases are high.
• Seeds take a long period to mature from plant.
• Pests can easily damage seeds meant for planting in storage.
Asexual propagation
This is a method of producing young plants by the use of a particular portion of the plant called the vegetative parts. These portions are the leaves, stem and roots of the parent plant.
There are basically two types of asexual propagation, they are:
1. The use of natural or specialized or modified parts of the plant.
2. Use of special or artificial techniques.
1. The use of natural or specialized or modified parts of the plant
These parts are bulb, corm, runner, rhizome, suckers, tubers and roots. These parts are naturally present in some plants and they can be used to produce new plants. Suckersare shoots that normally develop from the base of the parent plants, many crops can be propagated by suckers. Examples are pineapple, banana, plantain. 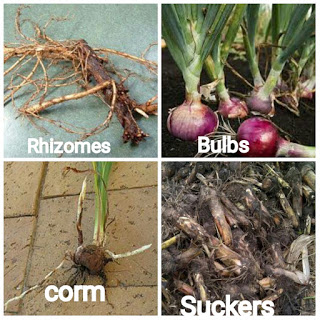 Rhizomes are underground stem which can be cut into sections and replanted, they are present in grasses e.g spear grass and ginger. Corms are swollen portion of a stem, they are found in cocoyam while bulbs are foliage leaves found in onions and garlic. These two portions can be used to propagate young plants of the parent plant. Others are runnersand tuber, tuber are found in yam while runners can Be found in potato and cowpea plants.
2. Use of special or artificial techniques
This is the development or induction of plant roots and shoots through certain means namely:
• Cuttings.
• Budding.
• Grafting.
• Layering.
The aim of these methods of propagation is to produce a single crop with desired characteristics found in two plants, it is normal done to improve the quality of a crop. In the method, the stem is allowed to initiate roots before being detached to start up as an individual plant.
Cuttings: When parts of a plant are cut into pieces and planted to produce a new plant, such cut portion are called cuttings. Cuttings may come from leaves, stem depending on the type of crop to be propagated. A cutting is detached or severed immediately below a node at the base of the stem at about 15-25cm long. It is the common means of planting cassava, sugar cane, cocoa, kola and coffee.

Budding: Budding involves uniting a bud from a plant with a stock from another plant of the same specie. Buds are cut from a mature branch of about 1-2 years old with an inverted shield. In budding, the bud which contains a small portion of bark attached from a young branch is inserted in a cut made in the stem or branch of another plant. The bud is referred to as the scion while the plant to be attached to is called the stock. The cambium layer of the stock and scion should be in close contact and the sap should be active.
Grafting: Grafting involves placing together or joining together of two cut surfaces of the same or closely related plants so that they unite and grow together. The plant on which the graft us inserted is called the stock, the planting material to be inserted is called the scion. It is commonly used on citrus crops. 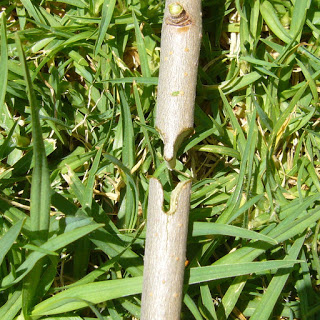 Layering: Layering is the bending of a branch of a plant in such a way that some of the nodes touch the ground. The branch is partially cut near one of the nodes that touches the ground, it is then pegged in a position and covered with rich loamy soil with forms  rooting medium. After a period of time, roots develop from the region of the cut and fully establish itself. The stem is then cut from the parent plant and transplanted to the field. It is normally used for mango, guava, etc.
Advantages of asexual or vegetative propagation are:
• Crops produced are uniform.
• It enhances early maturity
• The quality of the crop are improved.
• It is faster and economical.
• Yields are easier and faster.
• It can be used for most plants.
Disadvantages of asexual or vegetative propagation are:
• Propagating material cannot be stored for a long time unlike seeds.
• Requires technical expertise or efforts.