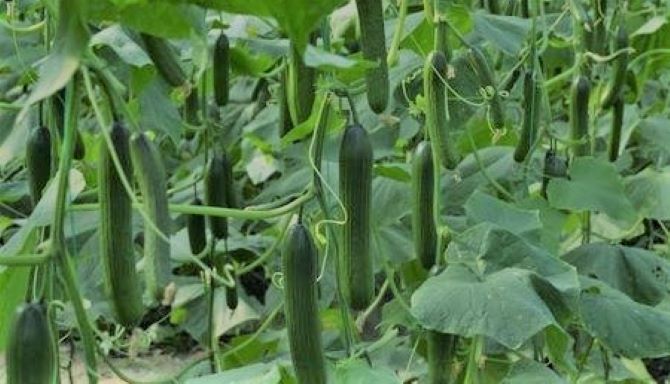 There are majorly two types of cucumber plants, those that are eaten fresh “slicing cucumbers” and those that are cultivated for pickling. There are different varieties classified under these major types. Some varieties may be smooth or spiny, some may have lots of seeds or very few, and some may be more vining in habitat or bushy.

The Different Types Of Cucumber

These varieties are extra-long and twisted. Snake Cucumber has thin, dark green skin that is marked with paler green longitudinal furrows. As it ripens, the fruit turns yellow and releases an aroma like the muskmelon’s aroma. This slicing cucumber is mild in flavor. It matures in about 55-75 days.

Because of its long, curved shape, the Armenian cucumber gained the nicknames snake cucumber and snake melon.

Japanese cucumbers are dark green in color and slender, with tiny bumps and thin skin. The skin and the seeds can be eaten. It has a crisp texture. It is a sweet variety.

English cucumbers are most commonly grown in a greenhouse, making them more expensive to buy. It is mature to harvest when it has grown up to 12-24 inches long.

This variety has a deep green hue and pinched ends. It is sweet and mild. It is a seedless cucumber which is perfect for chopped salads. These varieties tend to be thin, smooth-skinned, and 1 to 2 feet in length.  The majority are seedless, for this reason, many people find hothouse cucumbers easier to digest. They are sometimes called burpless cucumbers. They have a milder flavor than cucumbers grown on the field.

These varieties are ready to be harvested when the fruits are consistently dark green and about 8-10 inches long. American cucumbers have dark green flesh that occasionally have a light yellow patch near the top.

This cucumber is short and only needs to grow about 3-6 inches long before being harvested.

Kirbys are small and stout with a bumpy skin that is usually a mixture of green and yellow patches.  This variety has an incredibly crunchy texture.

Just as the name suggests, these cucumbers resemble a lemon; it is rounded with thin and marbled yellow skin. It has a light mild taste and crispy texture. Lemon cucumbers are best eaten on their own or sliced in a salad. It has a pale lemony skin that turns golden yellow as the cucumber mature, this cucumber has a very delicate, sweet flavor and crisp texture.

It is best harvested after growing only 2 or 3 inches long. Gherkins are short and stubby. It has a bumpy skin that tends to be a light shade of green. Although they can be eaten raw, gherkins are most commonly pickled and served on a relish tray.