Cashew production is a very lucrative business; it has a very high prospect in the global commodity market. The cashew tree is commonly cultivated for its nut; although the apple also contains essential vitamins and minerals. The cashew nut is usually grey in color with about 3mm thickness. Cashew nuts are usually exported in two forms:

Cashew cultivation is very active in South America. India and Vietnam are the largest markets for Raw Cashew Nut (RCN), while Europe and America are the largest consumers and the most viable market for processed cashew kernel.

These parameters will determine your profit margin as a seller and enhance efficient purchase as a buyer, hence, it is best you understand how to determine these quality parameters when buying or selling cashew nuts. If not for any reason, learn it for profitability reasons.

What you need to carry out the cashew quality parameter test

To carry out these tests effectively, you need the following equipment

When you have all these, you can carry out these tests yourself.  Now let us discuss how to carry out test tests properly

How to determine the Nut Count of Cashew Nuts 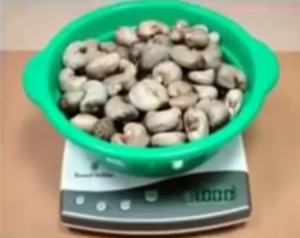 Count the number of nuts you have in your 1kg sample and compare with the above standard to know where it falls. Simple, isn’t it?

You need to know that all these quality parameter tests are carried out using that 1kg sample of cashew nuts you picked randomly from the bags of cashew in the warehouse.

To test the moisture content of cashew nut, simply use this simple test.

Press the nut between your index finger and thumb, if you observe any liquid substance on your finger or thumb, it means the cashew nut is not up to 12 percent moisture. If otherwise, it means the moisture content is good for storage and export conditions.

This is a manual method of determining the moisture content of cashew nuts. You can as well use a moisture detector device for precision if need be.

How to determine the KOR and Defective rate of cashew nuts

The KOR test and defective rate tests are complementary tests. The KOR is the Kernel Out-turn Ratio while the defective test shows the degree of defects in the nuts. These tests involve some simple arithmetic and they are usually the last tests to be carried out.  At the end of the test, you arrive at a figure which is usually compared with the International standard of KOR.

The International standard of KOR is: 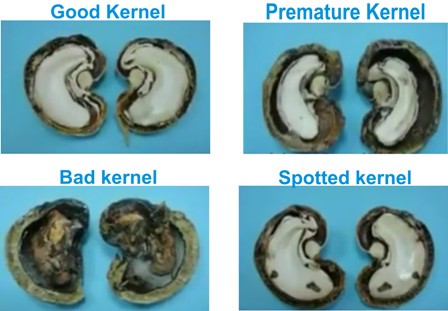 To carry out these tests, follow the below procedure:

It is similar in procedure with the KOR test. The defective rate test considers all forms of defects in the nut. Defects include; bad or rotten nuts, void nuts, premature nuts, and spotted nuts; the good kernel is not used here. It has accepted standard with which you compare the result you get after the calculations. When your final result is:

To carry out the defective test:

That’s the end of the tests.

At this juncture; I need to tell you how to get good quality results from the cashew nuts as a cashew nut seller.

As a seller, before packaging and storing your cashew nuts, it is best you carry out these tests to give potential customers the specification to attract purchase. Raw cashew nuts are sold on the basis of the KOR, hence, try as much as possible to achieve a good KOR.

Similarly, as a buyer, try to know and perform these tests before paying for the cashew nuts you want to buy. Do not rely solely on the quality specified by the seller alone, request for the 1 kg cashew samples and carry out the quality tests yourself to ascertain the quality of the nuts and the price to pay.

I hope you’ve learned something new, someone in your timeline also needs this information; kindly hit the Share Button to put it across.